No replies to this topic

Gentlemen, this week will see us in the skies over the Ypres Salient while far below in the mud rages the Battle of Passchendaele.  This is the typical "6-Flag" style map that requires targets be first recon'd then bombed.

***NOTE : Syndicate map targets are hard and generally require larger ordinance.  If a target doesn't go down with smaller bombs, return and hit it all again with the larger bombs***

Mission objectives: -Each side will have 6 primary targets to destroy, indicated by a flag on the map. Before a target becomes active, it has to be reconnoitered by making 10 photographs. The flag will then turn red. When a primary target has been destroyed, the flag will be removed from the map. Secundary targets are any vehicle, trains or tanks and balloons in enemy territory.  When 2 (more) enemy targets are destroyed, new airfields will be activated with different plane types. For photo recon missions only the designated planes "Recon" can trigger the photo sequence!

-Photo recons need to land safely at an active base to complete their mission!

Weather report: To be announced in mission briefing, we will attempt to match real world / live conditions 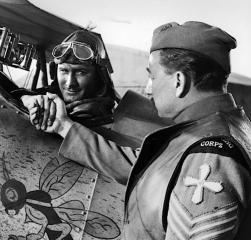