The 103rd Aero Squadron would like to officially welcome our two newest recruits.
US103_Baer is an excellent pilot and teammate formerly known as PauLMF

Named after Paul Frank Baer a native of Indiana who activated with the 103rd on February 18th 1918 and was the leading ace in the USAS at the time of his capture on May 22nd with 9 victories all on SPAD VIIs.
US103_Tobin is joining us after a long time away from game.

Edgar G. Tobin a native of Texas joined the 103rd on April 3rd 1918 and stayed with the squadron until the end of the war. He accumulated six victories flying in the red nosed first flight. He flew at least three different SPAD XIIIs, two of the numbered 20 and 3.
I'll get proper write ups and dossiers added to the 103rd website in the next few days.
Welcome Gentlemen! We look forward to hunting the hun with you both!
S!
Hunter

See you in the contested skies!

We will be looking for you in the hostile skies!

I am happy that you are both fighter pilots as Hunter will have less to worry about when I stay with my two-seater bombers...

And maybe I'll get some better aerial support as many times I have to fly my missions alone...

Thanks Hunter and everyone.
I enjoy flying with the US103 guys and it was time to get myself more organised tactically and learn from some excellent pilots.

@Cannon, happy to do some 2-seater work/protection with you and Parsons. That's what wins maps and it provides excellent bait

Am traveling this week but look forward to seeing you all in the skies next week.

Congratulations, US103_Baer and US103_Tobin! It's great to see the 103rd Aero Squadron thriving!

See you up there!

100 years ago today the Lafayette Escadrille became the 103rd Aero Squadron USAS. The pilots transferred to the USAS and American ground crews took over for the French troops. Happy 100th!

Congrats! We shall see you over the front!

now those are some nice looking machines! I don't fancy having those white noses pointing my way

Maybe we could get more pilots in the Squad if we painted half the cowling black.

Maybe we could get more pilots in the Squad if we painted half the cowling black.

You’ve been hanging around Adam again haven’t you! He’s a bad influence I tell you! Next thing you know you will join a band.....

Only chance I have of getting in a band is if the sound guy needs someone to run wires.

I wouldn’t have any problem with having someone running all the cables. Furlow, you’re hired.

S! Hunter, hope to see the 103rd in Bloody April this year!

An overdo welcome to US103_Hill! Named after the Lafayette flyer and USAS leader Dudley Hill. Welcome to the front!

We have also reorganized the flight along more historic assignments and to confuse the Huns!

Here is the official order for HQ:

Not so much confused as impressed. I know I've said it before, but I've absolutely loved seeing you guys grow from a 2-man flight to a full aero squadron!

I look forward to hunting the hun with you all!

Good job! Looking forward to shooting you down

Good job! Looking forward to shooting you down

We are developing a special Ricky recon Sniping sight for our spads. It will radio coordinates to our flak batteries for a special treatment.

General Orders 13 has been posted!

Welcome to our newest recruit US103_Talbot

US103_Talbot has chosen to commemorate Ralph Talbot who flew DH-4s with the USMC flight in northern Fracne. We made an exception to our historical representation rules do to the pilots background.

"A participant in numerous raids into enemy territory, Second Lieutenant Talbot was attacked by nine Luftstreitkräfte enemy scouts while on such a raid over Belgium, October 8, 1918, and in the ensuing fight shot down one of his attackers. Six days later, while on a strike against an enemy ammunition depot at Pittem, he and another plane became detached from the formation due to motor trouble and were attacked by 12 enemy scouts. In the fight which followed, his plane shot down one of the enemy scouts before his observer, Gunnery Sergeant Robert G. Robinson, was shot and the gun jammed. Talbot maneuvered the DeHavilland to gain time while Robinson cleared the gun, then rejoined the battle. Robinson kept on firing until he collapsed from two more wounds. Talbot continued alone, shot down another enemy plane, then dived to escape the remaining Fokker D.VII fighters. Crossing the German trenches at 50 feet, he kept his ship with its failing motor in the air until he reached the nearest hospital where he landed, delivered Robinson to medical personnel and returned to his aerodrome.

Second Lieutenant Talbot died on October 25, 1918, when his DH-4 crashed on takeoff, during an engine test flight, at La Fresne aerodrome."

They are a fine group to fly with! Looking forward to seeing you in the skies!

The 103rd is more active then ever, taking the fight to the hun every week! We are recruiting active pilots to join the USAS! We train constantly to improve our abilities whether you are a vet or a new player.

Here is a short film US103_Larner put together for me. A pair of 3rd Flight SPADs racked up 12 kills in a little less then two hours over the front.

Just a friendly reminder that the 103d Aero Squadron is looking for SPAD pilots to fill up our flight roster! We are a HISTORICAL REALISM based unit, meaning that we regularly train to improve our skills, have an organised flight roster, and use squadron tactics in order to take the fight to the Hun!

On top of that, we have our own 'game within the game' on Thursday Nights where, joined by the infamous J.G.1, we participate in the some of the most intense fighting RoF has to offer in Thursday Night Fly-In! This is our OPERATIONS NIGHT, where, according to our own scoring system, victories are awarded (or rejected) based on after-action reports filled out by our pilots, and eyewitnesses! We even have our own scoreboard for pilots to track their V-Life progress during Squadron Operations - but, if you get killed or captured, it's back to square one!! Following the submission of A.A.Rs, an official report will be released confirming or denying the night's claims. An example of one such report can be seen here: 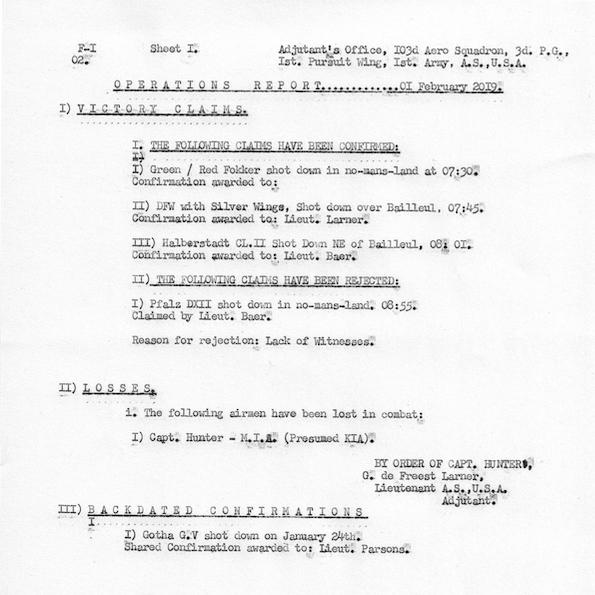 We also have a training night on Mondays, where we will teach you combat-tested techniques in order to better both your individual ability and your teamwork within a squadron. Rookies are welcome to apply - we'll soon have you shooting Albatroses and Fokkers down En Masse!

We are primarily based in the U.S, so typically we fly during UTC time, but we do have members from other corners of the world!

Although we take our training and flying on Thursdays seriously, we are a fun-loving group that love to joke around while we're not busy sticking it to Kaiser Bill - so, if this sounds like your thing, come and enlist at www.us103.enjin.com!!

The 103rd would like to welcome our two newest members to our ranks!

Corporal Doolittle was known as WindyCityHawk before joining the 103rd and choosing to represent and remember James Ralph Doolittle of the Lafayette Escadrille.

Corporal Biddle was known as Chives35 and has chosen to use the name Charles Biddle who was an eight Victory ace serving with the LFC and USAS. He was a leading in the 103rd before being posted to command the 13th Aero squadron and eventually the 4th Pursuit Group at the end of the war!

Congrats Doolittle and Biddle! I look forward to seeing you in the war-torn skies!

I cordially wish you a quick death.