55 replies to this topic

- I am having trouble busting balloons too! -

I never was a regular balloon buster, and whilst this mod is undoubtedly an improvement I have noticed the two or three occasions I've tried to bring down a balloons since installing it several passes at close range pouring bullets into them has done nothing…

Yes, I have confirmed this problem for myself.

If someone wants to do some tests for me to figure out which parameters affect balloons, speak up.

I'm not sure I will have enoug time, but I can give a try.
What parameters in the guns' files affect this capacity to destroy balloons and/or armour?

Don't know if this help, but I have just tested. With the reduced rate of fire and the lethality mod, it is not possible to destroy balloons with "normal" machine guns, Vickers or Spandau with 7 mm caliber.
But ballons guns still work great, a little burst and pop the balloon.
Maybe this can be a start?

EDIT: I've also noticed there are differences between the AP and "normal rounds" of both GErman and Allied bullets. Are the AP (German SK and British WMP_AP) rounds really more effective in piercing armor, or this is not modeled in ROF?

Thanks J.j. That observation is a good place to start.

The AP rounds and normal rounds do have different parameters for their damage effects, so one probably is better for attacking armor. That said, I don't view it as a failure that we're no longer able to destroy tanks with machine guns, but I would like to fix the balloon issue.

Thanks for looking into this guys.

I reckon the mod is great and I agree that brewing tanks with machine guns is a bit unrealistic, so that part would be no great loss, in fact an improvement.

But we gotta be able to pop balloons.
And what about Zepps in the future?
We are getting Zepps aren't we?

Finally had some time to test this mod and took my trusty old Albatros D.III for ride against a bunch of Pups, N17 and some Tripes.

That was a lot of fun. Really had to get in close and aim for the pilot instead of just spraying away. Most of my kills were pilot kills with a few flamers and only three wing failures. I also much prefer the lower rate of fire of the MG08.

Overall probably the most fun i had in RoF this year. I would've hoped the devs would've considered similar lethality changes when the modified all the weapons. Unfortunately, i guess we'll never be able to experience that in mods-off mode (and thus, MP). Now i basically can't fly MP anymore, because i really can't stand the vanilla mode after testing this.

Matt , would it not work online if someone had a mods off server and all folks ran the same mods enabled???

Matt , would it not work online if someone had a mods off server and all folks ran the same mods enabled???

P.S. J.j. The mod available here includes no adjustments to the balloon guns; that's why they work so well. The mod in the OP was just a test. However, the balloon gun lethality is adjusted with the RoF Refined mod, so I'll see if they still work there or not.

Ok, just tested it. The balloon guns still destroy balloons with "RoF Refined." Fwiw, I have never tried any weapon mods up until now! Hate to say it, but I think the weapon mods made RoF worse, not better… it's more of that "more firepower!" nonsense.

The easy fix was just to reduce the armor of the balloons by 50%. You can destroy them now. I updated the mod in the OP, and these fixes are also included with RoF Refined 0.13.

Gavagai - any luck making a mod that only increases the damage that aircrew take?

I didn't know the Fokker E.III was armed with one of these: 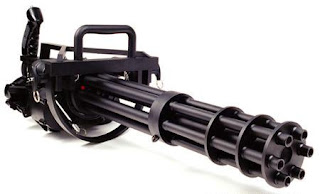 I tried this lethality mod combined with the realistic rate of fire mod and the AI mod in RoF refined. I have to admit, never has RoF felt so much like what I've read in all those books. Thank you so much for your work, these mods improved this sim A LOT, career mode is very immersive now!

RoF Refined includes both mods. No need to enable them separately. Glad you are enjoying it!

The lethality mod for me seems to conflict with the AI Gunners mod?
It says in JSGME
Folder "data\luascripts\worldobjects" has already been added by the "AI gunners (gavagai)" mod.
It seems to cause some problems for my game.

No, that warning just comes up because they mod files in the same folder.

Hey, so I love the mod and the effects that machine guns have on wings. The one thing I am sort of concerned about, though, is that the wings will stay more rigid after collisions.

This happened when I nailed the pilot of an FE2b after getting right up close for the shot. The plan abruptly pulled up as I was pulling away and I collided with his left wing at a low delta-V, and I could feel the planes "pushing" each other more positively than without your mod when my right wing would have buckled almost immediately.

I ended up gliding to a crash landing like the photo below. Curious, I did a few turns, and saw no flexing of the wing (a feature I love in ROF). It didn't seem like I was going to be able to tear it off at glide speeds. Earlier I was quick-missioning and saw a Gotha collide head on with Felixstowe and both their wings stayed very rigid, only peeling up when the bombers fell to earth and tried to pull out of the dive.

Does that seem reasonable to you? I might be a choice the player will have as to how he wants his wing physics vs gameplay. I agree that being able to lop wings off at 300 yards with machine guns is too much.

Also, would there be a way to reduce the damage wings take from MG fire, but leave their tendency to fold when serious damaged?