8 replies to this topic

This is a historical skin used after the war. Fictional in the game.

"Switzerland acquired a Nieuport 28 on June 25 1918, when 2/Lt. James F. Ashenden of the 147th Squadron strayed over the border and force-landed between Derendingen and Deitigen in Solothurn. Ashenden was interned and battered Nieuport N6212 was repaired and given the Swiss serial 607. At the First International Aeronautical meet at Dübendorf in 1922, Oberleutnant Robert Ackerman flew the aeroplane to victory ine the aerobatic competition, outflying 22 competitors from five countries…"


Thank for your vote Any idea what the other guys were flying?

Nice one. Here are some of my pictures I took when I was there:

Thank for the pictures Hyneman.

I corrected the blazon on the rudder. I lowered a little. (zip updated) Very nice! But now he seems lost in the flatness of Northern France!

Any idea what the other guys were flying?

I found this on wikipedia (but only in French):

Raoul Echard in the international meeting in Zurich, 1922

"Captain Raoul Echard, commander of the French squadron "Les Cigognes" came on the airfield in Dübendorf for participation in the international meeting in Zurich. A three-stage competition "circuit of the Alps" was organized on this occasion. After the first two steps without problem is in the final stage of Thursday, September 7, 1922, Dübendorf between Bellinzona and that the accident occurred at 24:25 above the village of Bodio.

With its 300 horsepower Spad, the commander is rapidly and exceeds the speed of its competitors, then the right wing comes off and the aircraft pitched nose. The driver was found dead on Mount Ghiso.

The organization of the French Air Force was for much of his work and he commanded the French squadron in Mulhouse.

Knight of the Legion of Honor May 22, 1917 and received two citations from the Military Medal and the Croix de Guerre. He is buried in the cemetery of Bonsecours (Seine-Maritime)." 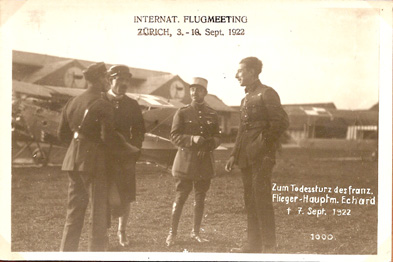