30 replies to this topic

here is result of my try to make known Guynemers spad from Paris air museum.

Fifi will have a Spadgasm. Seek cover.

Oh my, it is quite outstanding Salak. Thank you for this incredible looking machine!

It's a yes from me

Not easy to download…don't understand the chineese language of link…but i think i got it!

fifi, can you recomend me some english language… free net storage?

fifi, can you recomend me some english language… free net storage?

Hmm…i'm usually using MediaFire site, for uploading skins and stuff…
Easy to use and no problem so far. You should open an account, it's free

sory for problems for somebody (i dont have expirience with this

Looks nice but I can't work out how to d/l it from the site. Polish or Czech, presumably?

(sory for problems with no english on start of topic…)

Salak, I downloaded the skin and I think it's very nice indeed. I really like the yellow colour - I think you have got it just right. A "yes" from me. 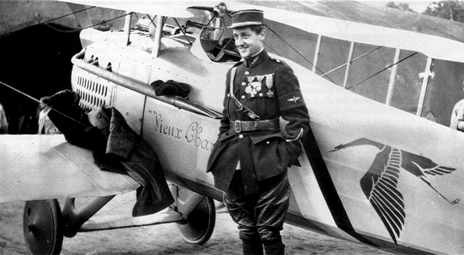 Hmm…just realised you said 180hp version for this plane, but the one we see on your screen shot is the 150hp template…

I think you should post it in VII 150hp historical instead! (as it was a 180hp engine very first version, but still on the 150hp body…)

EDIT: and in your download, there is only the DDS file…

I noticed that you have not yet updated your download file to meet the new requirements (e.g., the download is only the .dds file - it needs to have the .jpg preview picture and the .txt file as well, per the requirements noted here: NEW List of Requirements for Approved Aircraft Paint Schemes ).

I have extended your poll to give you more time to update your download file to meet the requirements. Please do so before your poll closes (or, if it's going to take you more time than that, please edit your first post to extend the poll by a few days to give yourself more time).

Hi, im in hospital now due my back:-( i can only write from my mobile phone. Next week i hope in change to work on my comp. I hope!

Salak, i wish you better health with your back

About your plane, that's gonna be a dilemna…
In real, it was a 150hp look, but with a 180hp engine in it! (very first 180hp release) So in ROF, impossible to get it right…
http://www.museeairespace.fr/dossier-thematique/le-spad-vii-s-254.html

I much prefer the first solution

Hi fifi! Im still disable, but thx for your greetings! About guynemers first180 hp spad:
There are more problematic skins in historical packs! Hehe (notoaw albD3skins, not wolseywiper se5a skins, hehe …last guynemers spad (since twotimes in pack)is incorect too…
This first 180hp spad(and many others early 180s) had older type of radiator, but performance was for sure closer to 180, than 150! If rof is making categories on base of engine… It need to be in 180hp spad category. I think…

Lovely skin, and a yes from me.

Hi fifi! Im still disable, but thx for your greetings! About guynemers first180 hp spad:
There are more problematic skins in historical packs! Hehe (notoaw albD3skins, not wolseywiper se5a skins, hehe …last guynemers spad (since twotimes in pack)is incorect too…
This first 180hp spad(and many others early 180s) had older type of radiator, but performance was for sure closer to 180, than 150! If rof is making categories on base of engine… It need to be in 180hp spad category. I think…

Can someone send me this in a zip file or post it on an English web link. My browser wont open page states that it has a bad virus on that page.

Fifi, i realy made this skin from 180hp spad template! Btw im mising spad7 models with other types of radiators. (all rusians spads had diferent noses… And im sure, that their skins will be presented in next skinpatch.

@ Salak - hope you are feeling better. I was going to process this one but I noticed by carefully inspecting the skin in the viewer that, as Fifi has pointed out above, this skin submitted for the 180 HP version has been created using the template for the 150 HP version. I understand that this plane is something of a hybrid, in that it apparently had a 180 HP engine in an older 150 HP type body structure. Thus, it's not going to be possible to get exactly the right result in the RoF modeling environment. I think either choice you wanted to make would be fine, i.e., either (1) make it as an early 150 HP version (based on the 150 HP template) so it looks more correct, accepting the tradeoff that it would not perform like it should have since it will be flying with the 150 HP engine that way, or (2) make it as a later 180 HP version (based on the 180 HP template), so it will perform more appropriately, accepting the tradeoff that it won't look exactly right in some small details.

However, I do not believe that it will work to make the skin based on the 150 HP template and then try to use it on the later 180 HP model by submitting it as a 180 HP version skin. I believe you're going to need to pick one or the other and go with it.

That would mean either (A) leave the skin alone, and I'll fix the file names and .txt file to change it to reflect the 150 HP model and submit it, or (B) redo the skin using the 180 HP template, and send me a link to the updated .dds file and I can submit it along with the .txt file you already did for the 180 HP version. (If it were me, I'd start by simply copying over all the new/modified layers you added for this one into a copy of the 180 HP template, and see if that would work - given how similar the templates are, I suspect it should work pretty well, with a minimum of extra re-work needed).

Please let me know which way you want to go with this one. I've extended the poll for a few days to give you some time to deal with this.

I realy made this on base of 180hp template!…I just use alpha layers for hiding some parts wich are not presented on early 180hp spads! I was manualy deleting radiator chuters, pitots tube on strut and tail lifting loop…plus…i was adding metal strips to struts, changing propeler logo and color, Michelin tyres…

(in fact…I was never inspected some 150hp skins, because I dont have reason to do it… when I was working on 180hp spad skin!

I still think, that this skin is presenting 180hp plane and needs to be in 180hp plane category… Its same like fokkers 7F with open or closed engine…

Well, if you were able to make all those adjustments to the 180 HP template and make it look that much like an early 150 HP version, then I applaud your wizardry

I flew around in your skin on a 180 HP model in the game, and could not detect any obvious problem with it, so I'll go ahead and process and submit this one as an S7L - if 777 sees anything out of the ordinary in their testing I'm sure they'll let you know.